“Why do people routinely bring work home on the weekends but never go to the movies on a Monday afternoon?  Why do we need to sit at the same desk every day?  Why do we have to fill out time sheets or need an HR department to file them?  Why are we interviewed by our bosses but never get to interview someone who wants to be our boss?”  - Ricardo Semler 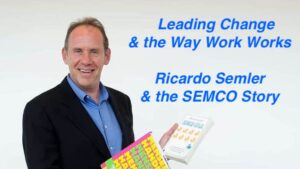 For more than twenty years, Ricardo Semler led the most unusual workplace.  As the Chief Executive Officer of the Brazilian corporation, SEMCO, his business flourished in exceptional ways.  Semco, headquarters in Sao Paulo, manufactured an impressively varied roster of products, including pumps that empty oil tankers, dishwashers capable of scrubbing 4,100 plates an hour, cooling units for air conditioner of huge office towers, mixers that blend everything from rocket fuel to bubble gum, and entire biscuit factories, with 6,000 separate components and sixteen miles of wiring.  But it is not what Semco makes that has executives and management experts the world over waiting months for a chance to tour Semco plant and offices.  It is the way the people of Semco make it.

After taking over the company from his father, one of Ricardo Semler’s first act was to throw out all the previous rules of the company.  The basic message to employees was to use their common sense, and to hold absolute trust in the employees.

In restructuring Semco, Semler and his team picked the best from many systems.  From capitalism they took the ideals of personal freedom, individualism, and competition.  From the theory, not the practice, of socialism, they learn to control greed and share information and power.  The Japanese have taught the value of flexibility, although Semco shrunk from their family-like ties to the company and their automatic veneration of elders.  Semco wanted people to advance because of competence, not longevity or conformity.

Semler showed how higher profits would generate higher pay for its members.  He encouraged employees to innovate.  Employees became associates and coordinators, and twelve layers of management were whittled to three layers.  People were interviewed and approved by the all who would be working for them.  And every six months managers were evaluated by those who work under them.  The results were posted for all to see.  Semco fully embrace participative management, and distributed leadership.  They were a company that was moribund and made it thrive, chiefly by refusing to squander their greatest resource, their people.

Ridiculous?  Inefficient?  A recipe for chaos?  Perhaps.  But Semler’s ideas work.  They work so well, in fact, that Semco grew from $35 million to $212 million in less than a decade.  And even with more than 3,000 employees, it has virtually no turnover.  People come from around the world to study Semler’s radical leadership and management practices.

Semco’s success shows that a company which puts employee freedom and happiness ahead of corporate goals can still achieve profit, sustainability, and growth that far exceed the competition’s.

According to the EpicWorkEpicLife archives, and specifically their article “Semco – Insanity That Works” (2022), gutsy leaders know that inspiring employees to assume ownership and responsibility is a way of saying, “I trust you, I believe in you, and you are an integral part of this company’s success.” When you walk into organizations where employees do not have a sense of ownership, you find a psychological wall between those individuals and the company. This atmosphere is precisely what Dilbert (a Scott Adams cartoon (a parody of organizational leadership, management, and behavior) represents — the soulless world of corporate cubicles in which people show up, do the minimum, assume no responsibility, avoid the landmines, and collect a paycheck. It is a waste for the individual, who is locked in an unfulfilling cycle of mediocrity, and it is a waste for the organization, which fails to capitalize on the gifts and talents of people who are capable of far more than they are achieving.

Go With Your Gut

A man after our own hearts, Semler urges employees to “go with your guts” in their decision-making. That has led to a company with a bewildering number of disparate elements. Among other things, it makes industrial machinery such as mixers for pharmaceutical and candy companies, builds cooling towers, runs office buildings’ data centers, provides consulting services on environmental issues, creates software for Internet applications, and manages human-resources activities for major companies.

According to Semler, his various operations have three things in common. They are complex enough to discourage new competitors from jumping in; their quality and price are on the high end; and they occupy a unique niche in their markets.

They have done well for Semler, racking up an annual growth rate of 24 percent over the last decade.  In 2002, revenues of $160 million were up from $4 million when he took over, all this despite Brazil’s rough economy (four currency devaluations, record unemployment, and hyperinflation). An investment of $100,000 in this convention-busting company 20 years ago would have an approximate value of $5 million today.

It is All About Performance and Accountability

Semco has no job titles, no organizational charts, and no headquarters. If you need an office, you go online and reserve space at one of the few satellite offices scattered around Sao Paulo. Semler said, “If you don’t even know where your people are, you can’t possibly keep an eye on them. All that’s left to judge is performance.” What’s gets judged at your company, visibility or performance?

Many workers, including factory workers, set their own schedules and their own salaries. They can also choose their own form of compensation based on 11 different options. What prevents associates from taking advantage of this freedom? First, all of the company’s financial information is public, so everyone knows what everyone else makes. People who pay themselves too much have to work with resentful colleagues. Not long ago union members argued that their pay increase was too high and would hurt profitability. Second, associates must reapply for their jobs every six months. Pay yourself unfairly, and you could soon be looking for a new job. Finally, employee compensation is tied directly to the company’s profits — there is enormous peer pressure to keep budgets in line.

Employees are encouraged to regularly take off half a day in the middle of the week. They lose 10 percent of their salary, but Semler believes that they should use that time for active pursuits when their bodies can handle it. He also feels that it is stupid to force people into retirement at their intellectual peak.

Workers choose their managers and evaluate them twice a year. The results are publicly posted. Meetings are voluntary; if no one shows up, it means that the topic to be discussed must be untimely or unimportant. At every board meeting, two seats are reserved for employees on a first-come, first-served basis.

Semco has no receptionists, secretaries, or personal assistants. All employees, including Semler, greet their own guests, get their own coffee, write and send their own correspondence, and make their own copies.

Semler, who, of course, has no title, has built a reputation for encouraging people to fearlessly ask “why.” Why do we have job titles? Why do we need a headquarters? (According to Semler, “It’s a source of control, discrimination, and power-mongering.”) Why shouldn’t employees have access to detailed financial information?

Semler believes that challenging assumptions, rather than conforming to them, is the key to building an adaptive, creative organization.

The company has a policy of no policies. Instead, Semco offers employees a 21-page “Survival Manual” filled with cartoons and brief declarations designed to help assimilate people into its culture. Here are a few examples:

“Semco doesn’t use a formal organization chart. Only the respect of the led creates a leader. When it is absolutely necessary to sketch the structure of some part of the company, we always do it in pencil, and dispense with it as soon as possible.”

“Neither has any importance at Semco. A person’s appearance is not a factor in hiring or promotion. Everyone knows what he or she likes or needs to wear. Feel at ease — wear only your common sense.”

“Our philosophy is built on participation and involvement. Don’t settle down. Give opinions, seek opportunities and advancement, always say what you think. Don’t just be one more person in the company.”

If all this sounds like a recipe for chaos and anarchy, consider this—Semco’s products are so good and its customer service so efficient that 80 percent of its yearly revenues come from repeat customers. Over the last decade, the company’s sales increased by 600 percent and profitability by 500 percent. Equally impressive, with a current backlog of more than 2,000 job applications, Semco has had less than 1 percent turnover among its 3,000 employees in the last 6 years.

As with Whole Foods (see article “Whole Foods – A Disciplines Democracy), employees at Semco cannot help but think and act like owners of the company. When no one’s in charge, everyone is responsible — for acting in the team’s best interest, for providing the kind of product and service experience customers demand, and for growing the business. And everyone is accountable for the results.

Ricardo Semler freely admits the aforementioned formula may not work for every business.  However, he does confirm how well these practices work at the Semco organization.

As of late 2016, Semler was involved in the foundation of other ventures which intend to teach other entrepreneurs and businesspeople how to implement a people-centric management in their companies.  Services include Semco Style Institute, where people are formed to find the right way to apply Semler's principles, and Leadwise, where people learn about all the people-based management styles.  Semler also shares his principles within his books, including Maverick, and The Seven-Day Weekend.  Each book analyzes success cases of companies from different industries and countries where this kind of methodology was applied.

Does your organization challenge assumptions? Trust people? Encourage gut-made decisions? Limit emphasize on time reporting, structure, and appearance? Does the organization measure success through performance, while encouraging full participation?  If not, WHY not?  Should it?

Are you ready to lead the change in the way your work works?

You can find out more about which cookies we are using or switch them off in settings.

This website uses cookies so that we can provide you with the best user experience possible. Cookie information is stored in your browser and performs functions such as recognising you when you return to our website and helping our team to understand which sections of the website you find most interesting and useful.

Strictly Necessary Cookie should be enabled at all times so that we can save your preferences for cookie settings.

If you disable this cookie, we will not be able to save your preferences. This means that every time you visit this website you will need to enable or disable cookies again.